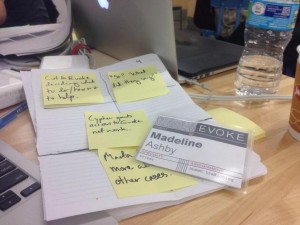 The week spent writing the comic, that is. The comic might not be that great. It’s hard for me to tell. But I had a great time writing it.

A while back, some people at Arizona State University’s Center for Science and the Imagination asked me to participate in the new phase of EVOKE, a transmedia experience produced by the WorldBank to teach young people about social innovation. EVOKE can take the form of a comic book, a web game, a forum, all three, or something new. I and a bunch of other writers, artists, and experts were asked to produce compelling narratives about issues like food security, local economies, nuclear proliferation, and the like. In short, to create a human story about an abstract issue that can often seem dry, boring, or just plain daunting in scale.

I chose human trafficking because I ended up learning a lot about it during my research on border security. A lot of the literature and media around border security automatically casts migrants as members of some kind of deliberate enemy incursion, and not people pushed to desperate measures by desperate times. Many of them have been lied to — deceived about where they’re going or what kind of work will be expected of them, or even if they’ll be allowed to live.

But until I had to write about it more directly, I had no idea of the true tragedy involved. I and my wonderful artist collaborator Anthony Diecidue were paired with two experts from the University of Guadelajara, María del Carmen Quevedo Marín and José Luis Echenausía Monroy. They’ve studied human trafficking throughout their careers, and the stories they told me broke my heart. While the story I developed for our project wasn’t exactly the warmest or fluffiest, it could have been so much worse.

It could have been about parents who sell their kids for their organs. Because young organs are the cleanest. They fetch the highest price. Just as an example.

After hearing stories like those, it seemed a little odd to leave Arizona feeling so energized and refreshed and confident. But that’s how I felt. Because not only had I somehow managed to write a full ten-page comic script in three days, and made what felt like lasting friendships over that short timespan, I realized that people really are interested in investigating these issues and others like them. They’re working it. We just never hear from them, because they’re not busy tweeting about it — they’re busy getting shit done.