One of our favourite activities in this house — at least, one I can comfortably describe in greatest detail — is talking about how Trump could win the Presidency.

This isn’t because I want Trump to win. I just see how he can. Papa Bear O’Reilly is right: Trump and Sanders are two sides of the same coin. Both are tapping into feelings of rage and despair in a populace experiencing the ever-widening wealth gap as precarity, hopelessness, and a lack of faith in government:

It’s not an accident that these men are frontrunners. They’re both charismatic campaigners, one with a definite brand and the other with years of media experience. Even Trump has acknowledged this. After their respective wins in the New Hampshire primary, Trump said: “We’re being ripped off by everybody. And I guess that’s the thing that Bernie Sanders and myself have in common. We know about the trade.” (He then went on to claim that Sanders had no idea how to fix the problem, and that only he did. The man has more stumps than Paul Bunyan.)

But picture, if you will, a Trump nomination. What happens next?

What happens next is that Trump immediately moderates. He pulls not left but centrist, depending on who his opponent is. Did he say all Mexicans were rapists? Oh, that’s not what he meant. Did he say Megyn Kelly was nothing more than a bleeding hole? Oh, that’s not what he meant. He pulls to the centre, forcing his opponent ever leftward, while talking about his business experience and using it as a way to explain that yes, Bush lied, and people died.

The Iraq War has been a key talking point in the DNC since before 2008. Barack Obama won that election in part because he promised a draw-down in that conflict. But it’s one of Hillary Clinton’s biggest weaknesses. She voted for the war, in which the US wasted trillions of dollars and invaluable scores of human potential, and now Trump (and Sanders) can both say she was wrong to do so. (Because she was wrong to do so. Everyone who voted for that war should feel profound shame. I feel exactly the same way about it now as I did when I marched against it in 2003.) But Trump has a business case. He can speak of the Iraq War(s) as a bad investment, as he did during the recent debate in South Carolina. “We didn’t secure the oil,” he kept saying. “We didn’t get anything out of it.” By changing the conversation to discuss the flow of capital, he’s lifted it from any moral framework. In an openly capitalist discussion of the Iraq Wars, it doesn’t matter if Iraqis are human beings, or that we tortured innocent people to get faulty intelligence, or that we’ve eviscerated the liberties of the Americans and poisoned the very notion of freedom. What matters is that we didn’t turn a profit in doing so. It’s a non-partisan sentiment. And that’s why it’s a winner.

So what if Trump doubled down on his statements, and proposed a draw-down in all land-based conflicts that the US is currently embroiled in?

What if he promised America the stars, instead?

I bring this up because I’ve been thinking about how to finance space exploration, related to a story I’m working on. I’ve talked to some scientists about it, and they all agree that the science is in place, and the ideas are there. What’s lacking is money. Or rather, what’s lacking is a significant financial commitment that lasts longer than a single administration. Kennedy’s promise that we would get to Luna was, in part, fulfilled because his death created an opportunity for a political legacy. Granted, there was a Space Race on. And even then, NASA didn’t get full popular support at the time, as even a visit to the Smithsonian Air & Space Museum will confirm. (Seriously, you should go.)

But what if Trump promised to be Kennedy and Reagan, at the same time?

Think about it. What better way to win over Silicon Valley money, idealistic Democrats frustrated by a lack of investment in infrastructure and science, future-fearful Tea Partiers, non-partisan libertarians, and others in desperate need of hope, than to promise the stars? Can’t you just hear this speech?

We’ve been the world’s policeman for way too long. We’ve been doing everybody else’s job. And what have we gotten for it? Nothing. So when I’m elected, the first thing I’m doing is pulling back our forces. I’ll still build the wall. And I still feel how I do about torture. But we’re wasting money that we could be spending on building the future. Trillions of dollars. Huge amount of money. Huge. And still, ISIS is growing. So, what do we do?

We go to space. That’s what we do. We let all these other people fight their wars down here in the dirt, and we build our dreams up there, in the stars.

I’ve seen how otherwise-reasonable people talk about space. It’s a magical place, for them. They forget all the side effects: the thinning bones, the early Alzheimer’s, the fingernails falling off. Do you know that every astronaut works on holding her head up, when she returns home? Under the gravity she was born to, she suddenly becomes an infant again, working hard to look her comrades in the eye. That’s space. It’s not just that no one can hear you scream. It’s that you might be too weak to do so. And yet. And still. The desire is there. No matter that there are real problems to solve down here, that the people breathing our air and toiling under our gravity are just as worthy of innovation. There will always be people who think we should leave it all behind, start somewhere else, leave behind all the bottom-feeders and their Earthly woes.

And wouldn’t Trump, the candidate of luxury and class, the one who swears up and down that he knows how to work with the private sector, wouldn’t he be the one to announce such an initiative? To look at the issues at play in this election and bring up something entirely different? Screw the wealth gap. Screw abortion. Screw gun control. Screw green energy. Screw ISIS. Bring me that horizon. Second star to the right, and straight on ’til morning.

Some candidates have the threat of the Rapture. They warn of tribulation, of end times, dogs and cats living together, mass hysteria. But what’s far more seductive — and far more successful — is to promise something good. Something hopeful. Something optimistic.

Isn’t hope the most seductive notion of all?

This isn’t to say hope is bad. Often it’s the thing that frames your vision of a better life, a better world. In foresight, it’s called backcasting: you envision the future you want, and you work back from there to see what could make that vision a reality. Envisioning a hopeful (or hoped-for) future is a great way to start the process toward change. That’s why I’ve participated in anthologies like Shine and Hieroglyph, and why I’ve worked with organizations like the World Bank and Engineers Without Borders. I understand the need for hope. It’s what gets some people moving.

It’s also what gets some people voting. 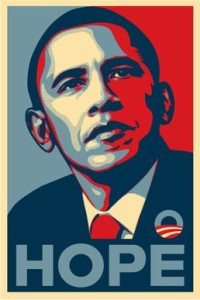 And it’s just as easy to exploit as the uglier motivations that Trump has appealed to thus far. If you think he’s gotten too far in this race by being an asshole, wait until he starts being nice.