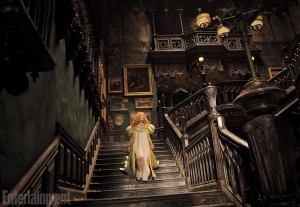 The other day, after watching Crimson Peak for the first time, I woke up with a fully-fleshed idea for a Gothic horror story about experience design. And while the story would take place in the past, it would really be about the future. Why? Because the future itself is Gothic.

First, what is Gothic? Gothic (or “the Gothic” if you’re in academia) is a Romantic mode of literature and art. It’s a backlash against the Enlightenment obsession with order and taxonomy. It’s a radical imposition of mystery on an increasingly mundane landscape. It’s the anticipatory dread of irrational behaviour in a seemingly rational world. But it’s also a mode that places significant weight on secrets — which, in an era of diminished privacy and ubiquitous surveillance, resonates ever more strongly.

Like the twenty-first century surveillance apparatus, the Gothic mode is preoccupied with that which is unseen. Hidden feelings, hidden histories, hidden staircases. Unspoken truths, secret plans, desires which dare not speak their own name. Gothic literature finds evidence of power or emotion sublimated “three hops” from the source. Rochester asks Jane to marry him, and lightning strikes a tree. Jane is sad, and the rain begins. It’s an inventory of emotional meta-data as evidenced by pathetic fallacy, presentiments of doom, inexplicable fevers, and twisted ankles.

So, how do we know the future is going in this direction?

I had my first inklings of this idea while reading the Institute for the Future’s anthology for the Age of Networked Matter project. I was part of it, but I didn’t get to read everybody else’s stories until they were all collated and I was on a flight to San Francisco to take part in an event related to them. Upon reading them, I emailed one of the authors and said: “Hey, I really liked all of these! Did you notice we all wrote horror stories?”

Consider the disappearance of the interface. As our devices become smaller and more intuitive, our need to see how they work in order to work them goes away. Buttons have transformed into icons, and icons into gestures. Soon gestures will likely transform into thoughts, with brainwave-triggers and implants quietly automating certain functions in the background of our lives. Once upon a time, we valued big hulking chunks of technology: rockets, cars, huge brushed-steel hi-fis set in ornate wood cabinets, thrumming computers whose output could heat an office, even odd little single-purpose kitchen widgets. Now what we want is to be Beauty in the Beast’s castle: making our wishes known to the household gods, and watching as the “automagic” takes care of us. From Siri to Cortana to Alexa, we are allowing our lives and livelihoods to become haunted by ghosts without shells.

Now, I’m not at all the only person to notice this particular trend (or, more accurately, to read the trend through this particular lens). It’s central to David Rose’s book Enchanted Objects, which you all should read. This is also why FutureEverything’s Haunted Machines symposium exists. Natalie Kane summarized it recently (and brilliantly) at the Lift 2016 conference in Geneva:

Now, it would be easy to characterize this particular future as simply “magical” or “animist.” A world in which everything is alive is a fairytale world, a world from myth or legend, wherein the careless treatment of a magic mirror (or a poisoned Apple) can alter the course of our lives. And a world of household spirits has deep roots in cultures outside the West. Is a “smart” home populated by multiple intelligences — some of them human — really so different from a home theoretically inhabited by yokai? Consider the nurikabe, a demon that is a sentient wall that refuses to budge. Or the mokumokuren, the haunted paper screen whose un-repaired holes and tears become eyes — one of our earliest models of in-home surveillance. Or, perhaps more familiarly, consider the kobolds and brownies and domovoi of Europe, the ambient household spirits who are mischievous or protective by turns, much like an insecure baby monitor.

So, what makes this future Gothic, as opposed to simply fantastical, or magical?

Gothic literature is at the roots of the skeptical Scooby-Doo story, wherein events that might be supernatural are explained by, as Stephen King once called it, “pure human fuckery.” The Castle of Otranto is a classic example, and so is Jane Eyre. Crimson Peak, for all its howling spectres, is still closer to this tradition — one character is experiencing the narrative as a ghost story, while the others are living their lives in a late-Victorian noir worthy of Cornell Woolrich or Anthony Berkeley. It is, as the protagonist says of her own manuscript, “a story with ghosts in it.” The ghosts, while real, play a supporting role in helping the protagonist actualize herself, much in the same way that weak AI and algorithms help us become different versions of ourselves.

The important thing to remember about most Gothic stories, as we tiptoe down the darkened hallways of our Gothic future, is that they often have happy endings. Justice is served. The heroine survives, her eyes opened and her agency confirmed.

But first, the house must burn down.