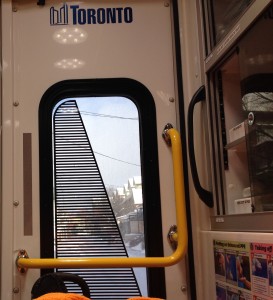 In the small hours of yesterday morning, I felt my heart squeezing inside my chest. It thudded, like in a comic book. I felt it pulsing down into my fingers. Each time I rolled over, I felt it there, leaden, like a ball bearing sliding up and down the walls of my body. Eventually I was able to go back to sleep.

When I woke up, I felt like I had run a marathon.

The pain was tight across my chest and shoulders. When I stood up, my heart squeezed. It hurt to breathe, and as a result, I felt that I couldn’t quite catch my breath. Well aware that signs and symptoms of heart attack are different for women than they are for men, I looked them up, and then called Telehealth. For those of you who are unaware, Telehealth is a free service offered by the province of Ontario that connects patients with registered nurses. If you’re sick but uncertain how to proceed, Telehealth can help you make a decision.

Yesterday, the nurse on the other end of the line called an ambulance for me.

“You’re exhibiting classic symptoms of a heart attack,” she said.

“Unlock the doors for the crew,” she said. “Do you have any pets? You might need to lock them up.”

We just had a major snowstorm here in Toronto, and so the ambulance had a bit of trouble getting to our place. “Does your street just never get plowed at all?” the driver asked later, once I was in Triage.

“Only by the late afternoon,” I told him.

The EMTs were awesome. They were patient with me, and with our cat Claudius, who was very curious about the 12-lead sensors they applied to me, and all their other tools. They were upfront with the fact that I wasn’t presenting as a normal heart attack patient. “Does that mean I don’t have to go to the hospital?” I asked, hopefully.

“But I feel like an asshole, dragging you all the way out here.”

This became a common refrain for me, throughout the day. 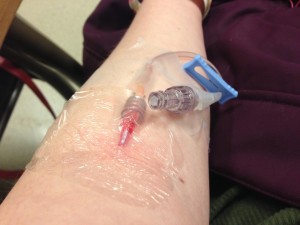 “Have you been under any stress?”

I graciously decided not to deliver a lecture on the perils of freelancing.

“Yesterday was a bad day, yeah,” I said. 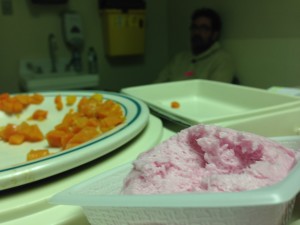 I stayed so long that they gave me lunch. It was the “heart healthy” menu, which meant press-formed chicken breast, diced carrots, cream of leek soup, and this pink stuff. I’m still not sure what this pink stuff was. It tasted like Marshmallow Fluff whipped with Kool-Aid crystals. By the time I was finished eating it, I was told my reports had come in.

My EKG was fine. My bloodwork was fine. My blood pressure was low. My X-rays looked normal. The heart monitor I’d spent a half hour attached to hadn’t picked up anything unusual. The doctor I spoke to said he couldn’t find anything wrong, but also that what I’d experienced didn’t present like a panic attack, or an asthma attack related to the renovation. Having visited the hospital for acid reflux a couple of years ago when I was heavier, I knew it wasn’t that — there was no sensation of a xenomorph incubating in my solar plexus.

And yet. Every time I stand up, or bend over to pick something up, my heart races and squeezes. My chest still hurts. I can’t take a deep breath without feeling a vise close around my chest. I hear my blood rushing in my ears. When I asked my ER doctor what it could be, he shrugged. “Sometimes this just happens,” he said. “Sometimes we’re more aware of our heart than at other times. Sometimes our hearts just feel heavier.”

And then he sent me home.

“I feel so stupid, because nothing’s wrong with me,” I told my husband.

“Well I feel great, because nothing’s wrong with you,” he said, and hugged me.

I felt like an asshole for wasting everyone’s time. My husband’s, the EMT’s, the doctor’s and nurses’. But at no point did anyone make me feel like an asshole about it. Literally everyone I spoke to said that I’d made the right call, coming in. Nobody shamed me or made me feel stupid. If anything, they felt bad for being stumped. Keep this in mind, the next time you think about not seeing a doctor. They wanted me to be okay. Someday I won’t be okay, but I also won’t be intimidated.

Keep this other thing in mind, too: aside from the delivery we ordered later on (remember that kitchen reno?), and the cab home, the total cost of the day was $45.00. That’s the cost of an ambulance once you have an OHIP card. Otherwise, it would be about $250.00. But that was all we paid. We didn’t pay for tests. We didn’t pay for exams. If I’d received a prescription, I’d have had to pay for that, and then file a claim later with our drug plan. But I was happy with the care I received. So, Americans: keep that in mind the next time a candidate says the words “socialized medicine” or “universal healthcare” this election year. Ontario’s healthcare system is not fully universalized; it’s not truly “single-payer.” But fully privatized care is a business plan that exploits the Protestant work ethic and its interpretation of poverty as a moral failing. It says that the poor doesn’t deserve to be healthy because they didn’t work hard or smart enough, conveniently forgetting the fact that we are all born into bodies, all of which will fail. Personal responsibility has no bearing on whether someone has depression, or a seizure disorder, or congenital heart failure. Even asking people to pay for their prescriptions is too much — it’s asking people to pay for having bodies, to pay for having been born, as though they had any choice in the matter.

The difference between Canada and the US is not that one country is kinder, it’s that one country sees human health a national resource, and the other sees human fear as a revenue stream. Private care is a scam. It’s a shakedown. It’s quite literally protection money. The fact that you have to pay to stay alive is proof of that — any system that holds a gun to your head doesn’t really care about you, no matter how nice the iPads in the waiting room are.

I still have no idea what happened to me, yesterday. It’s sort of a medical mystery. But as that mystery unfolds, I know I’m not alone in trying to solve it. The fact that people here feel free to make appointments and do yearly check-ups and visit the ER when they think something’s wrong, that’s huge. The fact that my province supports my breast check-ups, and that in a few weeks I’ll get to see if my lump is any bigger? That’s huge. Socialized healthcare is better when we call it what it is: care.

5 thoughts on “On (not) having a heart attack in Canada.”