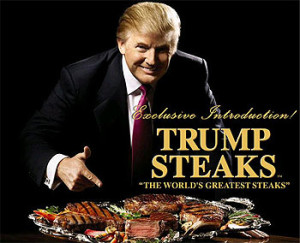 If you didn’t grow up on the Internet, or you have some sort of Real Job (TM) that keeps you away from the Internet for vast stretches of time during which you actually interact with your fellow human beings, you may be unfamiliar with Godwin’s Law, which states “As an online discussion grows longer, the probability of a comparison involving Nazis or Hitler approaches.” It’s closely related to Reductio ad Hitlerum, also known as “playing the Hitler card.” (It’s so common that you can actually buy Hitler cards to throw down when a conversation gets heated. I’d Google them for you, except that searching for “Hitler card” actually leads you to a bunch of racist bullshit.)

There’s a time and place to invoke Godwin’s Law. Or at least, there used to be. But lately, I’ve been thinking we should repeal it.

We have Donald Trump to thank for this. With his suggestion that all Muslims in America wear ID badges, he hewed too close to his platform’s Fascist roots. Think that’s too strong a word? Well, the truth hurts. It hurts a lot. But what hurts more is not Trump’s arrival (he’s always been out there, lurking, waiting for this opportunity to arise), but that the conditions have been met that guaranteed his arrival.

Trump is a good businessman. In an era when the Astors and the Rockefellers have been forgotten, and after drop-outs with a soldering iron and an empty garage became the captains of industry and the architects of our technological future, Trump has remained successful at a Gilded Age level. (You can joke about his bankruptcies all you want — but he bounced back from them. Multiple times. That’s one definition of success: coming back from repeated failure.) And like all good salesmen, Trump has learned that the first thing one must sell is oneself. While his fellow candidates dither and sweat and mutter talking points and try to look presidential after eighteen months of coaching, Trump has spent an entire career marketing himself. That is his strength. It’s not the message, or the money, or the hair. He is a born campaigner. He has done nothing but campaign, his whole life. Since taking control of his family’s real estate empire, he developed the Trump brand and extended it across multiple retail and entertainment platforms: golf, hotels, home furnishings and mattresses, beauty pageants, board games, steaks. (Yes, steaks. Steaks sold at The Sharper Image. Remember The Sharper Image?) Not all of these platforms worked. But enough of them did to bring us here today.

See, over these repeated successes and failures, Trump probably learned something very important: if you engage with the right customer segment at the right time, and you galvanize that segment into action, you don’t have to appeal to any other segments. His Tea Party segment is alive and real and numerous. They share racist memes on Facebook. They send tweets about killing Muslims after terrorist attacks. They believe in the myth of an America that never was, and the myth of a fallen America which must be made “great again,” like some embarrassed Evangelical teen miserably “reclaiming” her virginity. They are idiots, yes. But they exist. And they vote.

Trump is not a four-quadrant candidate. He never will be. But he likely understood that in a crowded field of Republican candidates, he would have to distinguish himself. Go farther. Offend more. Reach right down the jeans of Joe Sixpack and tickle his taint until his shame turned to ecstasy.

You know who else did that? Hitler.

No, I’m serious. I’m serious because I wrote a departmental honors thesis on the subject, in my third year of undergrad. Before I was trained as a futurist, I was trained as an historian. And this was part of my training. For nine months, I immersed myself in the Holocaust. And in what led to it. I visited the museum. I read books. I watched films. I looked at pictures. I read letters. I started losing sleep. I started crying for no reason. I started having nightmares. “Oh,” said a friend in the same program, when I told her. “You’re having the dreams, too.”

No, you should not make overblown comparisons to tragic and horrific events. The seasonal availability of pumpkin spice lattés is not the same as rationing. Your parents grounding you is not the same as being imprisoned. You generally shouldn’t be an asshole with a total lack of historical perspective. But you shouldn’t be afraid of some basic fucking pattern recognition, either. When someone accuses you of playing the Hitler card, remind them that you’re happy to play any card you have. There are millions of dead who can’t play any.

2 thoughts on “It is time to repeal Godwin’s Law.”